Centerville says good bye and thank you to K9 Kendra 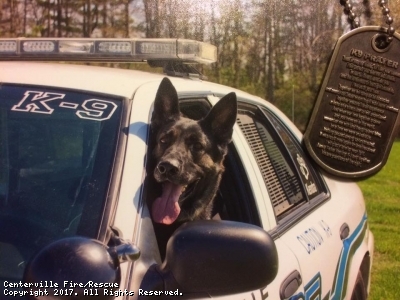 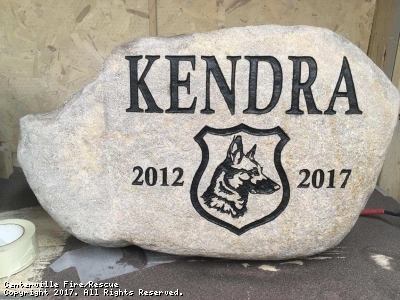 On September 25th, 2017, a 9-year-old German Shepherd K-9 Officer "Kendra" was lost due to complications from an undiagnosed medical condition. Kendra was a dual-purpose K-9 who joined her handler and partner Sgt. Matt Alexander at the Centerville Police Department in September of 2012. Kendra was used for narcotics detection and tracking.

Kendra was the first K-9 Officer for the Centerville Police Department, and was obtained through a generous donation from the local Moose Lodge #167 in Richmond. During her short time with the Centerville Police Department, Kendra and her Handler Sgt. Alexander had numerous successful searches resulting in the recovery of narcotics which resulted in numerous arrests. Kendra and Sgt. Alexander also ran several successful tracks locating both suspects as well as missing children.

Sgt. Alexander stated that "Kendra was a loyal partner and Officer as well as trusted member of my family. She will be sorely missed and never forgotten." Chief Buchholz added that "Kendra was a great asset that will be missed by the entire Centerville Police Department."

A memorial service is scheduled for Monday, October 2nd at 4:00pm prior to burial at the Centerville Police Department, 5247 U.S. 40 West, Centerville. Anyone wishing to pay their respects are welcome to attend.

This site has been viewed 156,640 times.
Calls
Pictures
Apparatus
Maintained by the members and staff of Centerville Fire/Rescue. Designated trademarks and brands are the property of their respective owners. Copyright © 2006-2022. YourFirstDue Inc. All Rights Reserved. Content on this web site is supplied by Centerville Fire/Rescue. YourFirstDue Inc. cannot be held responsible or liable for any content, text, pictures, or any other media found on this web site.
Management login
Powered by